Guide to living in Alicante

Did you know that there are two cities in Spain that are part of the ranking of the 10 cities in the world where it is possible to enjoy a quiet life, with everything you need and without being rich? One of them is Alicante, so in this article we are going to expose the benefits of living in Alicante.

Alicante is a port city on the southeastern coast of Spain and is the capital of the province with the same name and has a long and interesting history that dates back to the 3rd century when it was settled by the Iberians, a prehistoric people who later gave their name to the whole peninsula.  Archeological sites in Mount Benacantil and in Tossal de Manises confirm this.  It is also in the latter area where the Romans settled in the 1st century and called it Lucentum.  From 718 to 1249, the Muslims occupied this area they called Al-Akant.  The Kingdom of Castile took the city from the Moors and passed it later on to the Kingdom of Aragon.  The Middle Ages was a difficult time for the Villa de Alicante.  It was devastated by famines, plagues and wars which caused the population to be reduced by almost half.  However, in 1490, Villa Alicante was granted the title of city.

It was only in the 18th century when the growth of the city truly began, driven by the trade that was developed through the seaport.  This continuing development was cut short when the Spanish Civil War erupted with Alicante in the center.

With the end of the Civil War in 1939 and the arrival of democracy, Alicante experienced an economic and urban boom die mostly to tourism.

The Citadel of Santa Barbara is located on top of Mount Benacantil and was built in the 9th century when the city was still under Muslim rule. With the arrival of the Christian monarchs, the citadel was renovated several times. The castle offers a fantastic view of the Bay of Alicante.

The Alicante Town Hall is an impressive structure in the Baroque style that was designed by the architect Lorenzo Chapuli and built on the site of the former city hall in the 18th century.

The Basilica of Santa Maria is the oldest church in Alicante. It was built in the Gothic style between the 14th and 16th centuries over the remains of a mosque.  The basilica has a single nave with six side chapels between the buttresses.

The Co-cathedral of San Nicolas de Bari was built between 1613 and 1662 over an ancient mosque and designed by Agustin Bernardino in the Gothic style in the typical Latin cross plan.

The Barrios of Alicante

The neighborhood of Ensanche-Deputation is close to the sea and the beaches particularly the Postiguet Beach, one of the most famous beaches in Alicante.  It is in the center of the city next to shops, services and leisure areas.

The Vistahermosa neighborhood is also near the sea and has many open areas like parks.

This neighborhood is near the Albufereta beach and carries its name. It is a quiet area but located near the city center. It is an ideal place to raise a family.

The barrio of San Juan is one of the most modern in Alicante. It has large open areas and is close to the city center.

The Cape of the Orchards neighborhood is an upscale area with large chalets and wide open spaces between the houses.

Festivals and Traditions of Alicante

The people of Alicante commemorate their history with many festivals and traditions.  In May, the Santa Cruz neighborhood commemorates the search for the true Cross of Christ by Helen, mother of Contantine the Great, the first roman emperor to convert to Christianity with the Cruzes de Mayo.  The residents decorate their streets with crosses, flowers and ornaments and residents and visitors alike can dance, sing and eat to their heart’s delight.

The Moors and Christians Festival commemorates the struggle and battles between the Christians and the Muslims during this period in Alicante history. The participants are divided into Christians and Muslims and have to dress accordingly.  On the first day, the Moors take over the city and the next day, the Christians re-take it.  There are events that simulate battles, armies marching through the city, parades, drinking, eating and a whole lot of revelry.  This festival is celebrated throughout Alicante and the groups, clubs and troupes that participate wear elaborate costumes that represent the different people in their history.

On the night of June 23 to 24, the people of Alicante light 90 bonfires located in the different neighborhoods and beaches around which people eat, drink and dance together, and that ends with a show of fireworks.  The Bonfires of St. John is a midsummer festival that has roots in the ancient celebration of the summer solstice. This festival is so important that it has been designated an Asset of Intangible Heritage.

The Cuisine of Alicante 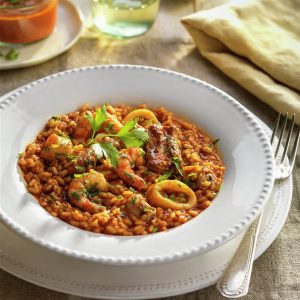 The cuisine of Alicante is a mix of influences from Murcia, Valencia and La Mancha. Rice is at the center of this cuisine and there are different ways in which it is prepared and served – with broth, baked, dry, black, mixed with vegetables, fish or meat. In Alicante, it is arroz alicantina and arroz a banda that are the most popular.

The pericana is an ancient dish that is linked to farm work.  It is a salted salad of cod or smelt, dried peppers, garlic and olive oil best eaten with toasted bread.

The borreta is traditional comfort food made with potatoes, cod, dried peppers, spinach or another vegetable with salt and olive oil topped with poached eggs.

The mojama is an Arabic word that means dry and is the name of a salted tuna dish that is best eaten with olive oil and bread.

The Alicante olleta is a stew made up of rice, winter vegetables, legumes, pork ribs, bacon, onion and dried peppers. It is a complete meal in itself.

The Beaches of Alicante

Alicante is located on the Spanish coastline referred to as Costa Blanca. Most of the beaches are near the city center and each has their own charm.  The Playa San Juan has fine golden sand and three kilometers of beach. Playa de la Albufereta is near important archeological sites that show the origins of the city. The Playa de Postiguet is located at the foot of the Santa Barbara Castle and next to the port and the Esplanade of Spain. The Agua Amarga Beach is the perfect place to bring your pet dog and has all the necessary services so that you and your dog can have fun all day.