Guide to living in Madrid

Madrid welcomes you! Find out how to get around, where to eat, the history of the city, as well as other interesting facts that we have set out in this guide to living in Madrid.

A Brief History of Madrid

Madrid is a city with a rich and long history.  The Arabs were the first to settle in this area on the central plain of the Iberian Peninsula, close to the Sierra de Guadarrama.  They called it Magerit to mean ‘land rich in water’. In 865, Emir Muhammad I built the Alcazar fortress, that would later evolve into the Royal Palace of Madrid. Magerit remained in the hands of the Arabs until 1083, When Alfonso VI of Castile took over the city.  All the symbols of Muslim influence and rule were removed during this period.  From 1202 onwards, the city began to grow around the fortress.

Madrid of the Hapsburgs

Madrid did not become an influential city until Philip II transferred the capital of Spain from Toledo to Madrid in 1561.  From the 16th and 17th centuries, Madrid was the capital of a great empire. Its architecture, however, did not reflect this.  It was a city of narrow streets, full of churches and palaces and characterized the austerity the Hapsburg dynasty. The most famous of the structures of the Madrid of the Hapsburgs was the Plaza Mayor.

Madrid of the Bourbons

In the 18th century, Madrid took part in the War of the Spanish Succession that was caused by the death of Charles II who died without an heir.  Louis XIV of France sent his grandson to Madrid to become King Philip V of Spain. The country was now led by a member of the House of Bourbon.   Among the new palaces and buildings Philip V built was the Royal Palace of Madrid, built on the ruins of the Alcazar that burnt down in 1734.  The Bourbon kings undertook a series of urban reforms to adapt the image of the city to the taste of the European courts. Fountains, gardens, monumental arches and the new royal palace changed the appearance of the city.

The Napoleonic Wars stopped all the efforts of the Bourbons to transform Madrid into a modern and developed city.  The city did not fully recover until the 1830’s.

Industrialization increased the population of Madrid in the 19th to 20th centuries with most of its inhabitants born outside Madrid.

After World War II, Madrid became a key consumer market and went through a period of modernization where large companies were set up and industries like the chemical-pharmaceutical, metallurgical and electromechanical began to develop.

Today, Madrid is one of the most important cities in Europe with a population of six million people.

The Architecture and Barrios of Madrid 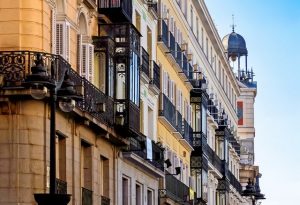 Very little remains of the Islamic and Medieval Madrid.  The remains of the city’s Great Mosque and medieval wall can be seen in the area near the Church of Santa Maria. Much of the interesting and grand architecture is of the Madrid of the Bourbons.

The Parque del Buen Retiro is one of the largest parks in Madrid and was built in the 17th century as the gardens of King Felipe IV’s Palacio de Buen Retiro.

From the Retiro, one can proceed to the elegant neighborhood of Salamanca that runs through the Calle Alcala, one long avenue that leads all the way to the Barajas Airport. The Puerta de Alcala that was commissioned by Carlos III and designed by his architect Francesco Sabatini, sits in the middle of the Plaza de Independencia.  The king liked both of Sabatini’s designs, could not make up his mind as to which he liked best and ordered that both designs be used, one on each side of the neo-classical gate.

A turn around the Plaza de Independencia brings one to the magnificent fountain of Cibeles or Cybele, the goddess of fertility, healer and protector in time of war that was designed by Ventura Rodriguez. Behind the fountain, is the grand Palacio de Cibeles.

Construction of the Gran Via began only in 1910 and was finished in 1929.  From this grand boulevard, many small streets branch out to reveal many historical buildings mostly decorated with large statues. On the Gran Via, one can find many shops, restaurants, bars and theaters. Nearby is the neighborhood of Chueca where one can find the Museum of Romanticism and the Museum of History of Madrid.  The rainbow flags that represent the LGBTQ community decorate many of the balconies in the neighborhood.

The Barrio de las Letras was the setting of the Spanish Golden Age when the best authors of the 16th and 17th century lived and wrote, their words forever embedded on its streets that lead to the Puerta del Sol where the symbols of Madrid proudly stand – a statue of a bear leaning on the arbutus tree and where kilometer 0 begins and from where all the streets in Madrid radiate from.

The Plaza de Oriente and the Palacio Real de Madrid, one of the largest palaces in the world, cannot be missed. From the Plaza de Oriente, one can proceed to the Catedral de la Almudena at the edge of the city.

Where to Eat in Madrid A typical breakfast in Madrid is chocolate con churros at the Churreria La Mejor although there are many other churrerias spread across the city.  One must also try the cocido Madrileño, a traditional chickpea (garbanzos) – based stew with meat and vegetables or the callos (tripe) Madrileña, a stewed tripe dish at Casa Carola.  For heartier meat dishes, there is the cordero al horno or baked lamb at Asador de Aranda or meat cooked on stones at El Buey.  If this is all too much, a simple but delicious bocadillo de calamares can be had at La Campana.

The Lena at the Hyatt Regency Hesperia Hotel is a two-Michelin star restaurant.  Conceptualized by famous chef Dani Garcia around cooking with fire and smoke.

The food hall of Galeria Canalejas has thirteen gastronomic spaces where one can find international labels such as Amorino ice cream, excellent Spanish food from all the regions and one of the largest gastronomic markets in Madrid.

Where To Shop In Madrid

The El Corte Ingles is undisputedly the best place to shop in Madrid for just about anything.

WOW Concept is a new mega store on the Gran Via that caters to generation Z and millennials with its ‘phygital’ shopping concept, a mix between digital and physical shopping.

One cannot leave Madrid without a visit to at least one of its many museums. The Golden Triangle of Art is the most convenient with three excellent museums within walking distance from each other.

The Museo Nacional del Prado is the main national art museum and is located near the Parque de Retiro. It houses one of the world’s finest collections of European art from the 12th to the 20th century particularly paintings of important Spanish artists like Francisco Goya and Diego Velasquez.

Museo Nacional Centro de Arte Reina Sofia is Spain’s national museum of 20th century art.  It was inaugurated in 1990 and houses the work of Spain’s greatest 20th century masters, Pablo Picasso and Salvador Dali.  The most famous masterpiece of the museum is Picasso’s painting Guernica.

The third member of Madrid’s Golden Triangle of Art is the Museo Nacional Thyssen-Bornemisza. It is housed in the Palace of Villahermosa and the core of its collection is made up of the extensive art collection of Heinrich, Baron Thyssen Bornemisza de Kaszon.

El Rastro is a large open air flea market in Madrid’s La Latina neighborhood, one of the oldest in Madrid. The market is held every Sunday and on public holidays and is where a great variety of products like ceramics, leather goods, vintage books, home décor including antique furniture, clothes, works of art and some much more, both used and new can be found at bargain prices.

Where to Party in Madrid

Madrid’s nightlife is hot, trendy and tireless. Madrid is teeming with bars, clubs and discos. These are just a few examples.

A the Malasana neighborhood near the Gran Via, are clubs like Tupperware Club that is known for  its fascinating wall art  and music from the 60’s and 70’s.

La Via Lactea is a great music bar and one of the best in Madrid that is decorated wall to ceiling with pop music memorabilia.

Club Nasti is great for indie music on Fridays and band music on Saturdays.

Calle Huertas, near the Puerta del Sol, is the center of Madrid’s nightlife.  It is where the hip and trendy lounge bars, wine bars, cafes and restaurants can be found.

In the neighborhood of La Latina, next to the Plaza Mayor, is where the famous tapas bars, pubs and restaurants are located.